Yesterday, here on the Kristall Buzz, we posted about a 2012 Limited Edition Swarovski Wild Cat that will be available in April.  This Swarovski Lime Panther is a special online release, likely with a price tag of around $1000.  Swarovski has another 2012 wild cat figurine that in the Swarovski shoppe and it appears to be available now!  It is the Swarovski Jaguar.

The Swarovski Jaguar is a crystal golden shadow wild cat.  It is approximately 6.5 inches long and 2.5 inches high.  The Swarovski designer for the jaguar is Stefanie Nederegger.Â  The crystal brandâs identification #âs for this figurine are 9100 000 344 and 1096796.Â  The MSRP for this wild cat is $420 USD.Â  The jaguar is naturally accented with the familiar wild cat pattern seen on these exotic animals and is standing on a matte finish base.

Our favorite crystal brand has produced other wild cat figurines, such as several Swarovski Tigers, Swarovski Lions, and Swarovski Panthers, but none are decorated quite like this one. Â I have to say, this looks like a âmust haveâ wild cat for my collection.

Swarovski collectors seeking the retired wild cats, can find many on the Crystal Exchange America web site.  Simply look in the Swarovski Animals category in their online store.

So now, with less than 24 hours til 2012, many Swarovski fanatics have already heard that the 2012 SCS Annual Edition is going to be a Whale named Paikea.  For those that did not know, here are the details about Swarovski Paikea from the Swarovski online shoppe.

The Swarovski 2012 annual edition is a crystal whale that measures 4 3/4 x 6 3/8 inches.  The Swarovski system number is 1095228. The MSRP of the Swarovski 2012 Humpback Whale is $530.  Swarovski Paikea is made of shadow crystal with crystal moonlight fins.  The whale is leaping over a wave and includes a title plaque, which is in the shape of a wave.  The designer of Paikea the humpback whale is Stefanie Nederegger.

Swarovski has begun providing personalities and naming the annual editionsâ¦.Siku the Polar Bear (siku from âiceâ).Â  And now Paikea (meaning tame whale), which also has an interesting origin.   This one is a bit longer more difficult to pronounce (PY keh ah). 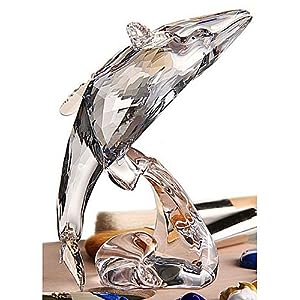 The Swarovski SCS Paikea Whale appears very powerful in this 2012 annual edition representation.  A Swarovski SCS Young Whale, also designed by Stefanie Nederegger, is available to members as an optional purchase.  The system # for the Swarovski Young Whale is 1096741 and it has an MSRP of $180.

Swarovski previously produced a whale as an SCS figurine.  The former Swarovski SCS Whales was available in 1992.Â  This crystal figurine was a mother and baby whale atop an ocean wave. This SCS whale was designed by Michael Stamey and was a part of the âMother and Childâ trilogy.Â  Retailing for $265, this Swarovski crystal figurine generally sells in the range of $350 – $400 at present day.

The Swarovski brand has employed over 60 designers for their famous crystal figurines.  There are certain to be many other talented individuals who contribute to these fantastic crystal designs, but generally, only a single individual is credited for the majority of the figurine designs.

Stefanie Nederegger is a Swarovski artist that joined the design team in 2004.  Her education included coursework at Innsbruck HTL and training at the College of Glassmaking and Design in Kramsach.  According to information on the official Swarovski web site, Swarovski has always had some influence in her life since they are so well known Wattens and Tyrol.

Stefanie Nederegger thinks it would be interesting to transform any type of animal into crystal figurines because of the ‘play on form and facets’.  She also likes colored accents to make crystal ‘vibrant and give it harmony’.

Stefanie Nederegger has been credited with ten Swarovski crystal figurine designs since she began with the company.  Five of the designs are in the Silver Crystal product line, four designs are for figurines in the Swarovski Lovlots product line, and one design in the Crystal Paradise line.  The list below is ordered by launch date and consists of the product name, then Swarovski system number, followed by launch and retirement years.

Of all the Stefanie Nederegger designs, my favorite one is the Lovlots figurine Camille. Â I like Camille’s copper color, and I like cats. Â Great figurines Stefanieâ¦looking forward to seeing your next designs!