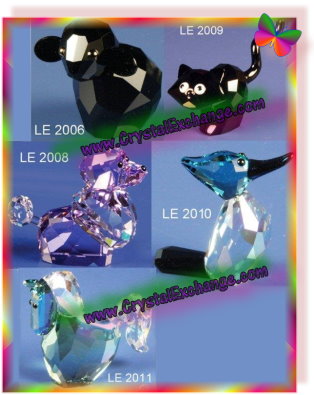 In 2008, the next group launch of Swarovski Lovlots was the Swarovski Gang of Dogs.  The Gang of Dogs consisted of 4 dogs, plus a Swarovski Limited Edition Dog (Violetta) that was only available in 2008.  Find out more in our Kristall Buzz News with Gang of Dogs Video.

Now, after the short background introduction, you will be pleased to know that there is a web site with the Swarovski Lovlots Retirements in a free and easy-to-use format.  RetiredSwarovski.com has a series of web pages with Swarovski Lovlots Retirements, 2006 through 2011.  If you want to know what year a Swarovski Lovlots figurine retired, type it in the ‘search’ box of the site, and the results list will indicate a list of possibilities for a collector to select from to make getting the retirement year (answer) successful.

Crystal Exchange America has a selection of Retired Swarovski Lovlots figurines in their online store. If there is a Swarovski Lovlots crystal figurine absent from your display, visit the web site now, or if it is something that they can locate for you.

I was able to confirm the following events being held in Florida in April, 2011:

The Mall at Miillenia
4200 Conroy Road
Orlando, FL 32839
Dynasty Gallery
1067 S Clark Rd
Ocoee, FL  34761
Independent Retailers: Euraisa, The Pewter Place, Best Wishes of Boca
Location: Mariott North
6650 North Andrews Ave
Ft Lauderdale, FL  33308
Galleria at Fort Lauderdale
2394 A East Sunrise Blvd
Fort Lauderdale, FL 33304
I don’t know what all the rules are about having Swarovski figurines signed, so it is recommended that you contact the stores directly regarding them.   Questions to ask could include:

Swarovski fanatics will be excited about the upcoming release of the new colorful Swarovski Paradise figurines.

If your Swarovski collection is missing a retired Swarovski Paradise figurine, Crystal Exchange America has a large selection available.

Swarovski fanatics will be excited about the upcoming release of the new Swarovski Jade, the Lovlots 2011 Limited Edition!

Pictures of eight Swarovski Lovlots Circus figurines can be found at the Swarovski web site.  The site also states that they should be available in the online shop for purchase in March of 2011.  There is no mention of the price on any of them.

If your Swarovski collection is missing a retired Swarovski Lovlots figurine, Crystal Exchange America has a large selection available. They have figurines from all four series in addition to the special limited edition Lovlots.

The Paradise ‘Exotic Flowers’ was launched in 2006.  As of today, there are about 11 items in this collection.  Some of the Exotic Flowers are retired and some are still being produced.

Overall, there are over 190 Swarovski Crystal figurines that have been connected with the Swarovski Paradise line.  Over the course of time, unassigned figurines have been introduced into the Paradise line, perhaps because of the significant use of coloring. The Cockatoo, Macaw, Parrot, and Black Diamond Toucan are examples are some of them.

At present, Swarovski does not utilize theme groups within the Paradise line, but the Paradise birds are in the ‘Silver Lake’ collection.

Crystal Exchange America has a selection of Retired Swarovski Paradise figurines in their online store.  If there is a Swarovski Paradise crystal piece missing from your collection, give them a shout to see if they have it available now, or if it is something that they can locate for you.

It’s been snowing A LOT here, and I thought it would be neat to experiment with a camera and Swarovski ornaments in the snow and ice!

The Swarovski Festive Hearts Ornament was resting in the snow (about 6″ of snow in the last day!).  This Swarovski Ornament can be purchased as a single ornament at the Swarovski web site at $41.

However, the Swarovski ornament set with the twinkling mittens is presently on sale for $55!  This Swarovski crystal figurine group is three ornaments in the same package (not three ornaments in three separate boxes sold as a group).  Since it is on sale, I’m thinking that this will soon be retired / discontinued “as a set”.Â  This is speculationâ¦.I have not checked with any Swarovski retirements listings.

I hope that all Swarovski fanatics are staying warm and safe in the frigid winter season!  Perhaps there will be some more pictures of Swarovski crystal in the snow posted here again!  If there are any retired Swarovski ornaments on your wish list, check out Crystal Exchange America web site http://www.crystalexchange.com/ â¦.there are a lot listed there.

Swarovski crystal fanatics will be excited about the upcoming release of the new Swarovski Lovlots Circus!

Pictures of eight Swarovski Lovlots Circus figurines can be found at the Swarovski web site.  The site also states that they should be available in the online shop for purchase in March of 2011.  There is no mention of the price on any of them.

If you are looking for retired Swarovski Lovlots, Crystal Exchange America has a large selection. There are figurines from all four series as well as the special limited edition Lovlots.