In 2012, the crystal giant introduced the Bo Bear figurines into the Swarovski Lovlots collection.  Four hip teddies joined several other groups in the growing Lovlots community of personality-filled characters.

In 2012, the Lovlots Bo Bear group consisted of:

In 2013, Swarovski has added two more very cool bears to the sloth of Bo Bearsâ¦ 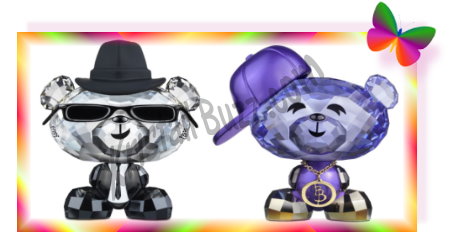 All six of the Swarovski Bo Bear figurines were designed by Peter Heidegger.  And all six characters retail in the price range of $150 to $160.

Lovlots Hip Hop Bo Bear – Hip hop is my life! Hip-hop Bo spends most of his time busting rhymes. His head shines in Provence Lavender crystal with a lacquered violet body and Crystal Metallic Light Gold arms and feet. He wears a cap in plastic material and golden necklace both featuring the BB logo. Not intended for children 15 and under. The Bo Bear comes with a unique metal tag that can be used as a key chain or bag charm.

Lovlots Blues Bo Bear – I am too cool for school! This funky character shines in Crystal Silvershade with Jet Hematite crystal arms and feet. He wears metal sunglasses and a lacquered suit, and a hat in a black plastic material. Not intended for children 15 and under. The Bo Bear comes with a unique metal tag that can be used as a key chain or bag charm.

I’m looking forward to seeing where the crystal brand goes with this collection of Swarovski bears.  Will they continue to grow?  Or will Swarovski collectors not really latch on to this line of animals?  Only time will tell!  Crystal Exchange America has an up-to-date page on the Swarovski Lovlots for collectors looking for a summary of the figurines in the community.

Here at Crystal Exchange America, we occasionally see figurines produced by Swarovski that have not been previously documented in publications written about Swarovski crystal figurines.  Not long ago, one such undocumented figurine, a Trimlite Bear, appeared in a collection that arrived here on consignment.

This recent Swarovski figurine is a crystal bear that very much resembles the Trimlite Bears that were sold in the Zales and Dillards stores in the 1980âs and 1990âs.

This newly discovered bear is approximately 1.5ââ tall.Â  This bear, like manyÂ  other Zales / Dillards bears, has a crystal head, crystal body, and gold-colored accents for the hat, scarf, and paws. 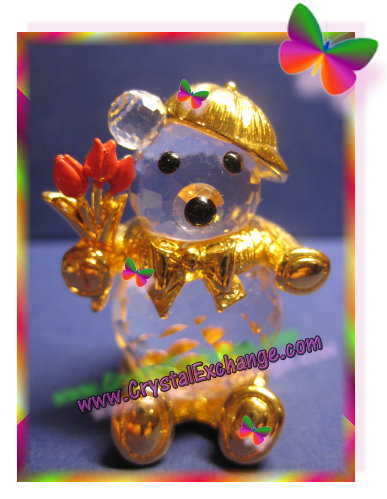 This Trimlite bear is wearing a baseball cap covering his left ear and slightly tipped on his head.Â  The bear is holding 3 red tulips in his right hand / paw.Â  Around his neck, he is wearing a gold bow.Â  This bear features the Trimlite âTâ logo confirming its authenticity in the gold trim underneath the body.

This Trimlite bear will be a new addition to the 2013 Warnerâs Blue Ribbon Books on Swarovski: Beyond Silver Crystal Book.  Jane Warner indicates that it will be referenced using BSC2012010 in the next edition, to be released in about 8 more months.  There are presently about 15 Zales / Dillards figurines in the book.

Other Dillards / Zales bears may be found hold flowers, a candy cane, or nothing.  Some bears wear bows, bonnets, or santa-type hats.  Some wear bows, scarves, or bow-ties on their neck.

The new baseball-tulip Trimlite Bear will be available for purchase from Crystal Exchange America in the coming weeks.  The company will be checking with other Swarovski expert dealers and stores in an attempt to establish a fair selling price which is attractive to the buyer and gainful to the seller for the unusual bear figurine.

Crystal Exchange presently has a listing for the Trimlite Dillard Zales Bear âTwinkles the Sparkling Bearâ on Ebay, with a Buy It Now price of $59 with FREE shipping.Â  Other Trimite bear figurines previously seen in the online auctions include âJoey Jinglesâ and âHollyâ.Â  BothÂ Holly and Joey Jingles are presently available at Crystal Exchange America near $125 each.

Swarovski crystal fanatics should check the site after the next inventory update near the end of August for availability.Â  Collectors can use the search feature to quickly find the figurine using search term âBSC2012010â.

Early last week, I shared information I found in a Swarovski announcement about their newest members of the Lovlots assortment â¦.Swarovski Bo Bears.  Today, I have more information about the Lovlots Bo Bears!

The official news from the crystal brandâs own web sites indicate that they will reside on the Lovlots Campus.Â  The Bo Bears are a âcontemporary interpretation of the popular teddy bearâ. 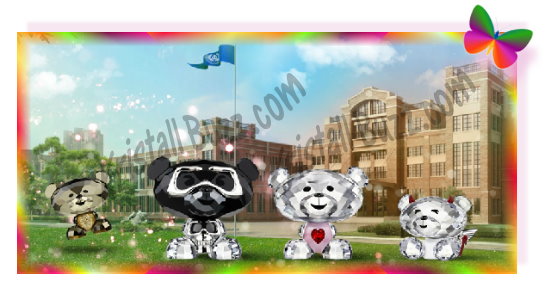 From my research, all the Swarovski teddy bears appear to be about 2 Â½â tall, and will retail in the $125 to $175 price range.Â  Left to right in the Bo Bears Campus image areâ¦

Swarovski crystal fanatics can find out all the past and new Swarovski Lovlots releases, 2006 through present.

The Lovlots Bo Bears are scheduled for release in their online shoppe July 9.   Bo Bear Jewelry, Charms, and Accessories are set for release the following week July 16.

Make room for more wildlife in the Lovlots City!  The crystal giant shares information about the initial sleuth of bears in its Swarovski Bo Bear launch:

Swarovski did not include any product images with the news.Â  From the sketch of teddy bears with the announcement, the Bo Bears appear a bit âHello Kittyâ-like to me with a large head and product cuteness drawing in the consumer collector.

The crystal brand did some product realignment at the beginning of the year, with the end result being that the Swarovski Kris Bears are Lovlots Kris Bears.  Hopefully the Kris Bears will be glad to see the Bo Bears in their Lovlots city turf.

In the Swarovski News announcements to its SCS members, the company reveals that the Swarovski Bo Bears will not be âexclusively crystalâ figurines.Â  They provide a hint that there will be âother various materialsâ.Â  Yet another aspect that Swarovski is leaving for crystal fanatics to figure out.

Swarovski Bo Bear figurines will be available on the online shoppe in early July.Â  About 1 week later, there will be accessorizing jewelry and charms in the online shoppe.Â  There is no mention of figurine size or price point.Â  Perhaps since Swarovski is incorporating ‘other materialsâ into the products, these teddy bears may be less expensive?