Swarovski and Clock collectors may be pleased to hear about a retired Swarovski Clock on ebay with an appealing opening bid!  The clock on ebay is the Swarovski Providence Table Clock (ebay item # 140729693062). 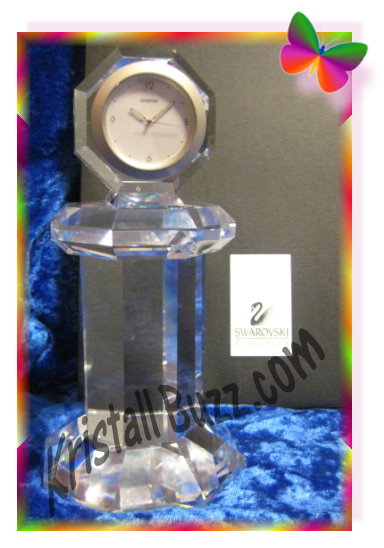 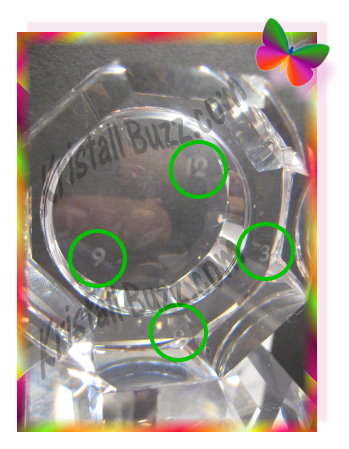 The Swarovski Providence Clock was designed by Steven Weinberg.Â  This table clock stands about 7â tall.Â  Swarovski assigned 9280 000 037 as the official part number and 235 432 as the official system number. Â Our favorite crystal company produced this clock from 1998 through 2003.Â  During the 5 year production run, the Swarovski Providence Table Clock retailed for $850.Â  Some of the clock units had edition numbers laser etched in the crystal on the back side.Â  I even discovered something new while I was writing this article…there are clock numbers on the back side of where the clock face is set in (3, 6, 9, and 12 o’clock only, with dots representing other numeric positions)!Â  Now, nearly 10 years after retirement, the Swarovski Providence Clock generally sells in the $175 to $300 price range.

The crystal giant sold a number of Swarovski Clock figurines, which are featured in a Kristall Buzz post from September, 2011.  Be sure to check out the article for more information about the nearly 20 clocks available over the years.

These clocks were available with 2 different contrasting metal finishes, gold and rhodium.  They were also available with 3 different faces: Alarm face, Date face, and Moon Dial face.  The date face had numbers 1-31 instead of the “3” on the face to indicate day of the month.  The alarm face was a simple face with roman numerals.  The moon dial face also had roman numerals, but also had other dials on the face indicating phase of the moon.  All the clock-works used on the Swarovski clocks had the word ‘Swarovski’ on the face.

Five years later, under the Swarovski Selection name, the company once again began producing Swarovski crystal clock figurines featuring Seiko clock-works.  Following the years of productions below, I have added some features that are noteworthy about the different clocks:

There are a few more functioning Swarovski Clocks, which get the Kristall Buzz Awards:

Some 7 years after the last clock has retired, we find Swarovski maintaining presence in the time-keeping and fashion industry.  Swarovski watches are available at the online Swarovski shoppe.  I found just over 65 watches in their categories: Aila, Citra, D:Light, Dresstime, Elis, Octea, Piazza, and Rock ‘n’ Light.

If you are looking for the retired Swarovski clocks, check out the Crystal Exchange America website at www.CrystalExchange.com .  Go to the “Other Silver Crystal” category, then sub-category “Clocks”.