The first Swarovski SCS crystal figurine in the âMother and Childâ series was the Swarovski âLead Meâ Dolphins.Â Â Â  The Dolphins were a beautiful figurine depicting the nurturing relationship between a mom and her calf.Â  The protective box is important to safely store the crystal figurine. 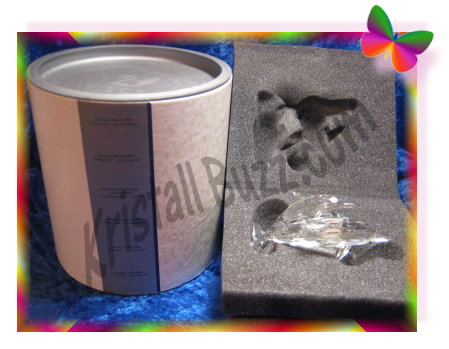 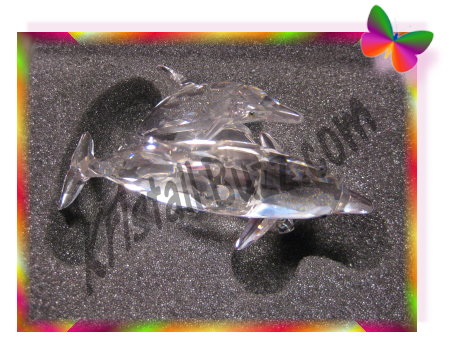 Proper placement of the SCS Dolphins in the Foam

The foam was specially formed to securely store or ship the SCS Dolphins figurine and certificate.Â  The dolphins foam contains a slot to be used for keeping the certificate unbent or wrinkled.Â  The SCS Dolphins have been the most difficult figurine to correctly place into the foam.Â  Good news thoughâ¦.this article contains proper placement instructions for correctly putting the crystal figurine into the Swarovski âLead Meâ Dolphins Box.Â  The dolphins foam should opened and placed such that the certificate will be underneath the crystal.Â  In your hands, hold the Swarovski Dolphins, so that the dolphinâs nose is facing right (3:00) and the base is toward the foam.Â  Press the Dolphins downward into the foam so that the tails are in the largest oval slot.Â  Note: If the SCS Dolphins have been on display (not stored in the foam and box), the fit may feel firm and incorrect, but this is normal.Â  Since putting the Dolphins in the foam may feel erroneous, many collectors have taken scissors or knives to the foam cutting it and eliminating placement confusion. Â This could potentially devalue the SCS Dolphins which is complete with box and certificate to a Swarovski fanatic who demands a âtop-notchâ package since technically the foam has now been altered.

A special thanks to Swarovski expert Jane Warner, co-author to Warnerâs Blue Ribbon Books on Swarovski for consulting on the ‘Lead Me’ Dolphins Box article.

Regarding availability and replacement value, the SCS Dolphins Box is not readily available.  The last one that sold was over 5 years ago, and those prices are too out of date to even mention.

Swarovski offered the SCS membership in many countries when the Dolphins were revealed as the 1990 SCS Annual Edition.  The multi-lingual Swarovski certificate for the Swarovski Dolphins was necessary to avoid the need for language-specific certificates like the Swarovski Lovebirds certificate. 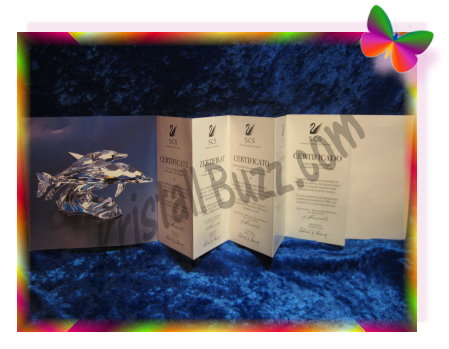 Swarovski Dolphins Certificate for the 1990 'Lead Me' Dolphins

The Swarovski âassigned reference number is located on the back side of the certificate in a very small font.Â  The Swarovski Dolphins certificate is DO4MM90XX. Â The Dolphins âLead Meâ Certificate can also be found using another reference # DO1X901C, which was originally used in the Warnerâs Blue Ribbon Books on Swarovski catalog.

The Swarovski Dolphins COA was originally in a square white envelope when it was packaged with the crystal figurine.  This original envelope is tissue-lined, and has the familiar Swarovski Swan logo on it and below that the letters SCS on the front side.

A special thanks to Jane Warner, co-author to Warnerâs Blue Ribbon Books on Swarovski for consulting on the Swarovski Dolphins Certificate article.

Regarding availability and replacement value, the SCS Swarovski Dolphins Certificate is not readily available.  At Crystal Exchange America, the last ones sold were in the neighborhood of $100 – $125, but that was in 2007.  It is nearly always best to purchase the Swarovski SCS AE figurine complete with box and certificate, as it may not always be easy to find a replacement box or replacement certificate at what a collector deems a reasonable price to pay for it.

The second Swarovski trilogy is the âMother and Childâ series, all designed by Michael Stamey.  The first crystal figurine of the series is the Swarovski Dolphins, which are the feature figure of this article.

The Swarovski Dolphins were available for purchase only in 1990 by collectors who had a membership in the Swarovski SCS Club.  These ‘Mother and Child” Dolphins measures about 4 3/4â long.Â  It is a figurine with 2 clear dolphins, a mother dolphin and a baby dolphin, swimming atop a clear wave. 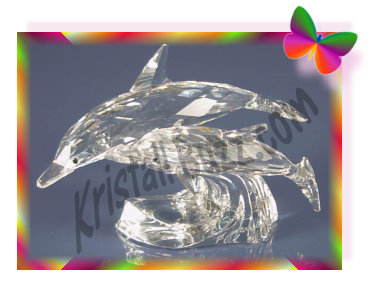 The SCS Dolphins contain what the crystal brand calls the ‘backstamp / bottomstampâ, which is included for the sake of authenticity.Â  It is fairly easy to see the designer’s initials “MSt” and the year “90” can be seen.Â  âMStâ is used for Michael Stameyâs initials since MS is used for Max Schreck (Swarovski SCS Lovebirds ‘Togetherness in 1987)

The âLead Meâ Dolphins were known using the Swarovski part number DO1X901, and years later the system number 153 850 was revealed, so it can be identified using either number.

It is not unusual for the non-collector owner (i.e. someone has inherited a collection but is not knowledgeable about Swarovski) to refer to the figurine as a âSwarovski Porpoiseâ pair.Â  In doing some research, I found that there are distinct differences between dolphins and porpoises.  The crystal brand has not released any Swarovski porpoise figurines.

Since the 1990 SCS Dolphins, the crystal giant has produced other clear crystal dolphin figurines:

The SCS Swarovski Dolphins retailed for $225 USD in 1990.  The purchase price included the crystal figurine, a custom box for the figurine, and a Swarovski COA (certificate of authenticity).    While the resale price of the Swarovski Dolphins  surpassed to over $900 shortly after 2000, a mint condition figurine, complete with original packaging can generally be purchased on the secondary market for $450 – $475, from Swarovski expert dealers, like Crystal Exchange America.