Swarovski has produced several koala crystal figurines from 1987 through present day.Â  While we frequently hear people call them âkoala bearsâ, technically koalas are not bears, so being correct and following the Swarovski naming convention, they will not be referred to as Swarovski Koala Bears, simply Swarovski Koalas.

I do want to mention that this post is an update of an article I wrote Â in 1999 for a publication called âCrystal Wiseâ.Â  So if it seems a bit familiarâ¦.that is why!

Before we get you too terribly confused, I’ll tell you what I tell my customers to help determine Left vs. Right facing positions. And since I am in the US, I’m going to assume you are driving a car in the US. If the koala is driving a car, with his hands/paws on the steering wheel and feet on the pedals …. Is he looking out the driver window, or is he looking at the passenger? 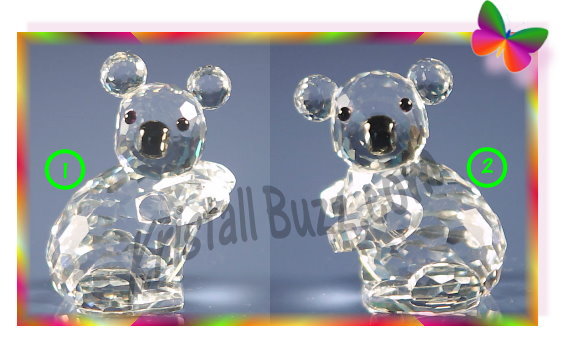 Swarovski Koala (Var 1 on Left and Var 2 on Right)

Now you probably wonder why they face different directions?  The Swarovski Koala (7673 040 000 / 014 366), the left facing one (#2 in the image) is made in Europe. His ears are set lower on his head and his shoulders are rounded with a straight edge for the paws.  The right facing one (#1 in the image) was made here in the US. His ears set much higher on his head. His paws are rounded with a straight edge at the shoulders.  The arm stone was simply put on in a reverse direction on these two different animals. In 1993 when Swarovski America ceased putting together pieces and began receiving everything already assembled, that is when the US began seeing the left facing variation of the Swarovski Koala. The story on the Swarovski Mini Koala (7673 030 000 / 119 472) is more interesting.  This information I learned from a former Swarovski employee who saw first-hand what was occurring.  To assemble the various Swarovski pieces, a set of “blue prints” is needed.  It tells each stone that is required and shows where the stones should be placed to assemble the piece.  When the blue prints arrived here in the US for the mini koala, they somehow got “reversed’.  The people on the assembly line saw the blue prints and put them together opposite of those assembled in Europe!  When this discrepancy was brought to the attention of the management, decisions were made assemble it “right facing”.  When the assemblers got confused, they would pull one off the shelves and assemble it to match …and if it happened to be facing left ….the new one would be assembled as such.  This vicious circle happened several times before a final correction and decisive action was made to ensure that all mini koalas were facing right. By the second year of production, they were all made facing right (#1 in the image).  Because the error occurred here in the US, the left facing mini koala (#2 in the image) was only available to purchase in the US.

The left-facing mini koala is one of the more highly sought after on the secondary market. The best estimates I have are that 5,000-10,000 mini koalas were sold in the US the first year (1989) they were available. With the repeated cycles of production errors/corrections, about 600 – 800 were made facing left.

The Swarovski Koala and Swarovski Mini Koala have âdiscontinuationâ dates as well as official Swarovski retirement dates.Â  Now that we have the variations explained, here are the years that the different crystal figurines were available:

Just a final suggestion … If you are fortunate to have the left-facing Mini Koala or are considering to purchase one, be sure to compare the crystal figurine to the label on the box to ensure that the label shows a left facing one. (A right facing mini koala on the label may suggest that someone has altered the piece).

The Swarovski Koala crystal figurines (in all four size / variation combinations), as well as the Swarovski Koalas can all be found at Crystal Exchange America.  Go to the website: www.CrystalExchange.com and use the search box to see the âkoalaâ figurines presently available.