In the late 1980âs and into the 1st decade of 2000, Swarovski produced 6 train cars to make up the Crystal Locomotion set. Swarovski also created a mirror for the train cars and a wooden train track.

All the Swarovski train cars were available to purchase separately.  Below is a list of the figurines, their Swarovski identification numbers, and the years that they were available: 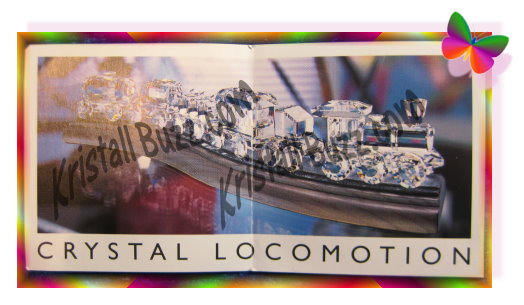 Gabrielle Stamey was credited with the design for all the train cars.Â  These train figurines were part of the âWhen We Were Youngâ theme group.

The crystal brand also sold two different subsets of these figurines as a group.  One subset was the Swarovski Train (Set of 3) which consisted of the Locomotive, Tender Car, and Wagon Carriage.  All 3 figurines were in a single box and together retailed for $305.  The other subset was called it the Swarovski Train (Set of 4).  All 4 items were packaged in a single container, and sold for $400.  The train figurines in the foursome were the Locomotive, the Tender, the Wagon Carriage, and the Petrol Wagon.

Additionally, these train figurines should not be confused with the Swarovski Mini Train, which has the following identification numbers: 7471 400 000 / 193 014 .  The Mini Train is a set of 4 train cars in a single box, which includes a round mirror with a train track painted on it.  The Mini Train is much smaller, and the train cars between the 2 sets cannot be interchanged.  This set appears consists of a locomotive and 3 identical cars that are similar to the wagon carriage.