During the past couple of weeks, I noticed a Swarovski Soulmate Panther on eBay, which is advertised by the seller to be a very rare prototype.  This particular Swarovski figurine just might raise the eyebrows of Swarovski crystal fanatics wanting more information about it.

It can be very difficult to tell which items are truly Swarovski prototypes, and which items have after-market alterations enhancements and are misrepresented for sellers to make a buck.  The controversy will always remain without official company statements, which I seriously doubt would ever happen.

This press release is about a Swarovski Frosted Mane Lion that is for sale at Crystal Exchange America.Â  Iâm not aware of any official company statement regarding its authenticity.Â  Having it for sale on our web site, I do get asked my opinion about the authenticity.Â  I can only say that I really donât knowâ¦.the Swarovski Frosted Mane Lion is interesting, and it is attractive.Â Â  If the price is right and you like it, buy it.Â  But I do not recommend a Swarovski collector purchase it with the impression that it is genuine and that it will increase in value, because there is simply no proof at this time to substantiate the claim. 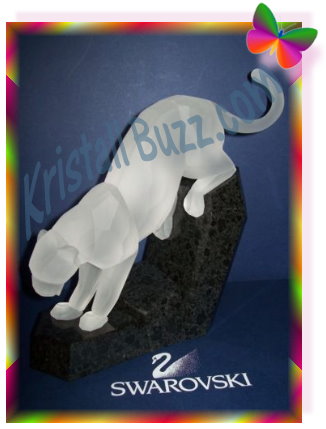 So, now on eBay (a closed auction), is a Swarovski Soulmate Frosted Panther, which the seller claims is a rare prototype, a part of the Eclectic Panther collection, in the Moments of Wonder display at Swarovski Vienna. Â The sellerâs description clearly states âfrosted flocked white (matt)â.Â  And that it is âvery rareâ, âprototypeâ, about â15 pieces worldwideâ.Â  What might be actually concluded about the authenticity of the Swarovski Panther from the auction?

Swarovski crystal fanatics will have to form their own opinion.Â  IF this is a fake (aftermarket enhancement), I think it is sad that society has risen to the level of deceit to cash in from altering a fabulous Swarovski design, then misleading the public that the Swarovski company produced it AS IS.Â  And if it is genuine, the seller is going to have to come up with better proof of the statements in the auctionâ¦.i.e. high quality conclusive photos of the display, perhaps prototype logos, or official company statement.Â  It will be interesting to follow this figurine through the holidays to see if it does ever sell.Â  I originally saw it listed and closed unsold for $5500 or best offer.Â  Several days later, it was relisted and closed unsold for $3950 or best offer.Â Â  My recommendation is that everyone should use caution when purchasing crystal advertised as âprototypesâ, as this could be extremely difficult to substantiate.Â  Personally, I would even remain leery of crystal figurines that âslipped out the back doorâ, and the like.

I certainly donât wish to put a damper on anyoneâs holiday spiritsâ¦.I just want to provide some food for thought so that no one ends up with buyerâs remorse about spending a nice chunck of change on what could be a fraudulent figurine (aftermarket enhancement).