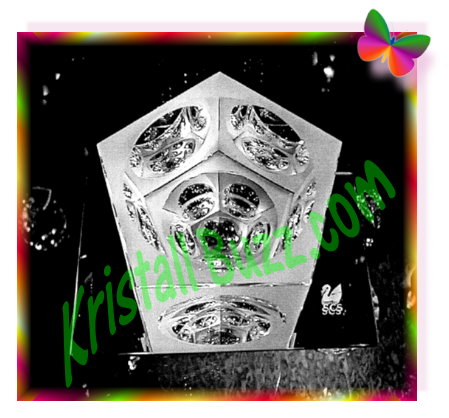 Jimer at Swan Seekers Network sent us an article from her newsletter archives about this figurine for collectors who are uncertain about what the rare Swarovski Crystal Pentagon is.

From Maret Webb, who originally wrote about a Pentagon found in Italy, basically shared this:  The large Pentagonal crystal, Swarovski item # 9456, weighs 2.2 lbs was designed in March, 1977.  Another one was later located in Arizona.

One thing that both paperweights had in common was literature, written in German.Â  The translation of the literature they ascertained wasâ¦. The original examination date for the design was March, 1977. No one knows for certain if that was a production time or design time since it contains the Swan logo, which was not introduced until 1989.Â  The category description for the Pentagon is âready productâ from the âmain programâ.Â  The literature in German further indicated that the item was produced in Factory #1, which was surmised to be in Wattens.

10 colors of vaporization effect are listed as available, as well as the opportunity for an emblem.  (Crystal Exchange commentâ¦these are likely to be the same 10 colors that we find on the colored paperweights like carousels, rios, and pyramids).  Suggestion of the emblem leads one to believe that this was a presentation type piece that could be customized upon order and that this is further reference to consultation with the customer.

The Pentagon comes in a very nice box with metal hinges and a latch.  The box sides can somehow be removed, leaving the Pentagon on a blue velvet pedestal for display.

No one knows how many were ever produced, but they are seldom seen.Â  The literature makes reference to a minimum order of 240 units, but it is not clear if that was for the order of which the Pentagon came from or for new orders at that time.Â  Referring back to the group designation âready productâ , one may conclude that the factory produced 240 units at a single time, which would then be available for customization.

A special thanks goes out to Jimer at SwanSeekers.com for the Swarovski Pentagon article!

According to Warnerâs Blue Ribbon Book on Swarovski, the Pentagon is 3 Â¾â high.Â  They indicate that the Swarovski Pentagon figurine is also known as the âSchool Block Paperweightâ.

I have regularly seen this Pentagon Swarovski Paperweight on ebay, since Feb, 2012.  The ebay seller generally advertises with a Buy It Now price of $5700 – $6000 USD.  I have not seen this item sell, despite the numerous attempts.