Since the launch of the Lovebirds in 1987, the Swarovski annual editions were created as trilogies: 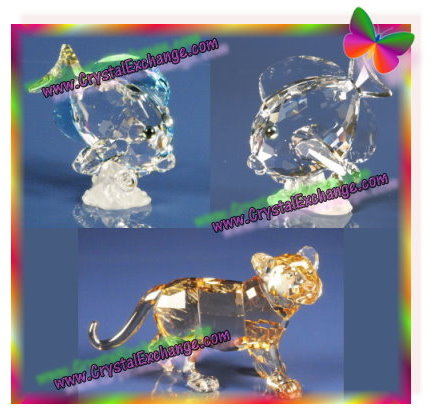 The trilogy offered 2008 through 2010 was âEndangered Speciesâ.Â  Swarovski SCS members who purchased all three in the series, Pandas, Gorillas, and Tiger, received a Standing Tiger Cub for their loyalty gift.  An identical Standing Tiger Cub was also available for purchase by SCS members for $180, but under a different part number / system number

I found out, albeit the hard way, that my local retailer would sometimes use my SCS number, and other times my husbandâs SCS number.Â  I did not know this until I called Swarovski asking where my loyalty gift was.Â  I was told that neither number was used for all three years, so I was not eligible to receive the loyalty gift.Â  I wasnât sure how that was my fault, nonetheless, no free gift.

These Swarovski loyalty gifts, the two Blue Tang Fish and Standing Tiger Cub, typically sell $125 – $175 on the secondary market or in the online auctions

On the company’s web site, in an exclusive area containing Swarovski news, it is mentioned that there will be a loyalty gift in 2013 for SCS members who purchase annual editions in 2011, 2012, and 2013.Â  It appears to be a secret at this timeâ¦..no clue if it will be complimentary to the annual editions for the three years, or a completely different figurine.Â  So, knowing that Swarovski is continuing the tradition they began in 2007, make sure that you confirm your SCS number is being used when you make your Swarovski crystal Annual Edition purchase.