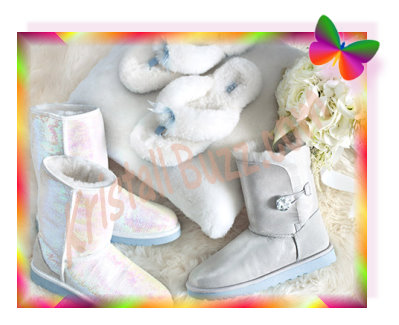 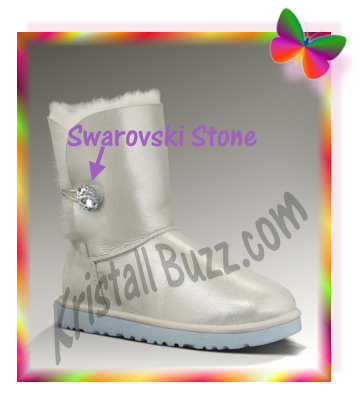 All 3 footwear products will have light blue soles, just in case that bride forgets her âsomething blueâ in her wedding day attire.

More information can be found on Ugg Austrailia web site, as well as the ability to make your purchase now:

I canât honestly see a bride or the wedding party wearing Swarovski Ugg Boots during the wedding, but to each their own.Â  I think the flip-flops would feel nice on a brideâs feet during the reception, and who would even know as more often than not, their beautiful wedding gown hides their feet.

Hopefully the bride and groom will have some Swarovski Crystal figurines in their bridal registry too!

Swarovski crystal fanatics and Ugg fanatics, get ready for your Swarovski Limited Edition Ugg Boots!  These are Ugg boots, embellished with Swarovski crystals for several major markets.  The Ugg boot decorations celebrate some famous cities/regions (most of which are in the USA):  London, Miami, Los Angeles, Las Vegas, New York City, and Washington DC.  According to the articles I read, the limited edition Swarovski emblazoned boots retail in the $800 – $900 price range!  And the boots are only available in Ugg stores of the celebrated cities.

The New York City grey boots commemorate the New York skyline with the Empire State building in Swarovski stones.  The United Kingdom version shows a crown in Swarovski crystals.  There is a Union Jack version as well for the United Kingdom, that appears to be decorated with clear and red Swarovski crystal stones.Â  The Miami, Florida Ugg boots are white, decorated with numerous colors.Â  Pink flamingos and palm trees are obvious icons for these boots.Â  The Los Angeles, California Ugg boots are black.Â  The design appears to focus on the nightlife of the city and nearby Hollywood, featuring red and clear Swarovski stones.Â  The Washington DC / Georgetown Ugg boots are naturally decorated with traditional red, white, and blue Swarovski stones, with our grand flag designâ¦.stars and stripes forever.Â  The flag is on a grey-colored Ugg boot.Â  The Las Vegas, Nevada Ugg boots appear to be dark brown and symbolic of the gambling in the city.Â  Aces, poker chips, and dice are incorporated into this city design.

One site I read indicated that there were 100 pairs created for each city, and that each pair was numbered to ensure authenticity.  I supposed that makes them Swarovski NLE!  I did not find any mention of the release date. There is a theory that the team effort between Ugg and Swarovski will extend to other cities, as if these cities are test-market areas.

I like my Ugg boots and slippersâ¦.very comfy.Â  However, I cannot see myself spending a small fortune on footwear embellished with crystal unless I plan to display them right next to my other Limited Edition Swarovski figurines in the cabinet!