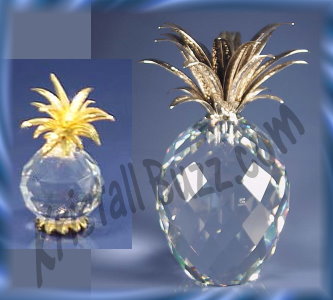 With the play on numbers on Pi Day, how about a play on words and symbols?  I’m unaware of any Swarovski pie figurines, so let’s go with π-neapple figurines!  (Hope that wasn’t TOO bad??)

The Crystal Exchange America website has some Swarovski Pineapple figurines in their online store.  They can be found in the Fruit category (on the left side of the screen) 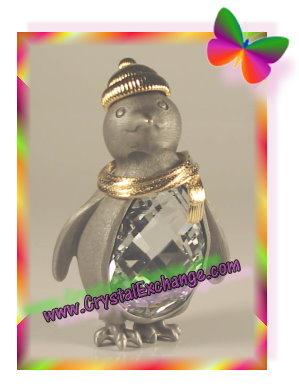 The Kristall Buzz, a blog on Swarovski Crystal, has launched its fourth video on YouTube!  This video highlights Swarovski Tiger crystal figurines along with some beautiful and exotic wild cats. Take a look!

Swarovski SCS Tiger Cub, Standing  – This Swarovski tiger cub was available to SCS members in 2010 and is a gorgeous addition to display with the  SCS tiger.  The Swarovski identification numbers are 9100000166 / 1016678 AND  9100000165 / 1016677 depending on whether it was purchased or provided as a loyalty gift by the crystal brand for purchasing the entire “Endangered Wildlife” trilogy using the same SCS number for all three pieces.  The non-gift figurine retailed for $180 in 2010.  Like the SCS tiger, the color is ‘golden shine’.  The Swarovski SCS Tiger cub measures nearly 3.5″ in length.

Swarovski Chinese Zodiac Tiger – This Swarovski tiger is part of the crystal brand’s “Chinese Zodiac” series.  The identification numbers are 9100000135 / 1002980.  The official color is silver shade crystal.  It is about 3.25″ long.  This is the only tiger in the video that is presently available on the Swarovski web site, and it retails for $300.

Swarovski Limited Edition Chinese Zodiac Tiger – This Swarovski  tiger is identical to the zodiac tiger described above, except that the color is in golden shine.   The identification numbers for this Swarovski limited edition figurine are 9200000269 / 1016810.  It was only available in China from 2009 – 2010.

Swarovski Tiger Paperweight – This Swarovski Tiger is silver in color, resting upon a crystal ball.  This tiger was in the Swarovski Trimlite group “Crystal Sculptures”. Â Swarovski used unique product identification numbers to represent the metal color of the tigerâ¦.72116 is the number for the gold tiger and 72117 is the number for the pewter tiger This figurine was available 1983 through 1986 at a retail price of $95. Â This Swarovski tiger is very difficult to find and will likely command prices of $800 – $1200 dollars. No Trimlite mark was found on the figurine shown in the video.

Elizabeth Adamer was credited with the design for all the Swarovski SCS tigers.   They truly look like a nice feline family.

Both the Swarovski Zodiac tiger figurines have a clear crystal base that is engraved matt finish name in English and Chinese seal script.

If you are a feline fanatic or collect Swarovski wild cats, many of these Swarovski tiger figurines can be found in the Crystal Exchange America store:   www.CrystalExchange.com .  Use the search box in the store and type in “tiger” (singular form, not plural) to  view the crystal figurines presently available with pricing. 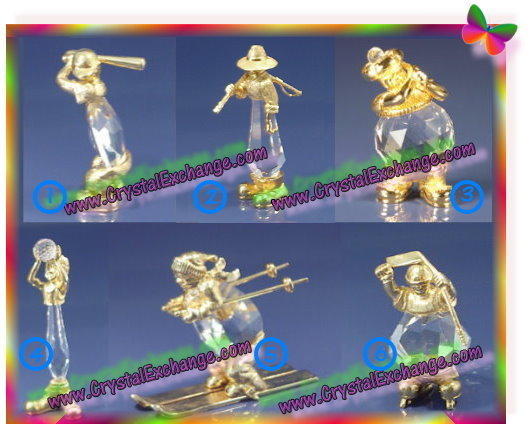 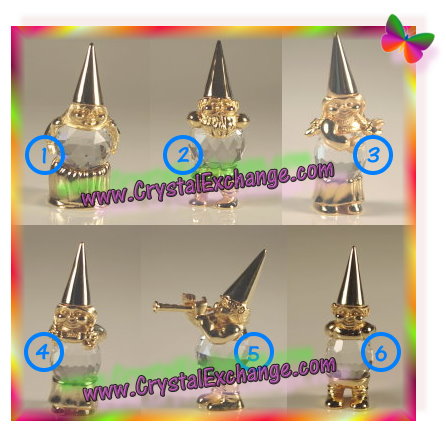 I recently learned that the first week of August is celebrated as ‘National Clown Week’….an interesting piece of trivia that I was unaware of.  Clowns come in all shapes and sizes.  Many clowns wear happy faces.  Some clowns have special talents.  Some clowns juggle. Some clowns do magic.  Often, clowns can be found in a circus, at a theme park, in children’s hospitals, and in parades.  If you see a clown, smile and let them know they’ve made you happy.

All the Swarovski Trimlite clowns incorporate the typical clown characteristics.  They have silly clown hats.  They have oversized clown feet.  Some are performing their ‘special clown talent’.   And best of all, the clowns are all doing something to make people smile.

The Swarovski logo that would be found on these crystal figurines is the Trimlite “T”.  The  Trimlite logo is stamped in the metal of the figurine.  The Swarovski boxes for these figurines were white boxes with gold-colored plastic ribbons. Certificates are not applicable to these figurines as there is no such paperwork as a ‘Trimlite certificate’.

These Swarovski clown figurines retailed for $30 or $50 each in the 80’s when they were available in retail stores.  Now, on the Swarovski secondary market or on online auctions, the clowns are likely to cost $200 to $300 each for ones in excellent condition with original packaging.

It is worthwhile to mention that the production quality of crystal figurines has vastly changed in the past 30 years.  It is not unusual to see rough edges  or other imperfections on the older crystal because that was likely acceptable standards at the time.  Many serious crystal collectors will not accept chipped crystal figurines, but should be mindful that one considered ‘mint’ at that time will not likely as pristine as figures that are presently produced and sold.  Now, due to the age of the Trimlite figurines, the gold has possibly dulled, tarnished, or even chipped off.  Collectors should keep these things in mind when setting their own personal standards of acceptability into their own collection;  do not require standards higher than what Swarovski themselves expected in the 1980’s.

Crystal Exchange America presently has 3 of the 6 Trimlite Clown figurines offered on their site, ranging in price $215 – $350. They can be found in “Vintage Swarovski” category, “Trimlite and Zales” sub-category of the store.